Gradual: A Renaissance Chant Book and its Role in the Counter-Reformation

By Julian Berkeley and Tony Scotland

An illustrated monograph about the rescue, restoration and history of a monumental book of early printed Gregorian Chant, and its continuing use in the revival of the traditional Latin liturgy. The Gradual of the title, containing the chants of the Mass, was published by the great Renaissance printer, Jan Moretus, at the Plantin Press in Antwerp in 1598. This was the supreme achievement of a new technology supplanting the art of illuminated manuscripts – and an act of defiance by a Church besieged by the Protestant forces of the Reformation.

Clockwise from top left: Monks chanting at a lectern, Mary Ward and her recusant companions cross the sea to a convent in Flanders, Archduke Albert VII of Austria and his wife the Infanta Isabella of Spain

While the Dutch War of Independence raged around Antwerp, the Plantin Press spared no expense in creating this important and influential work, dispatching copies throughout the Catholic world to keep the Divine Office alive, and to raise the spirits of the recusant faithful. Among these were the aristocratic Englishwomen who fled Elizabeth’s persecutions for the relative safety of the Spanish Netherlands, and founded a Benedictine convent in Brussels, under the abbacy of Dame Joanna Berkeley. 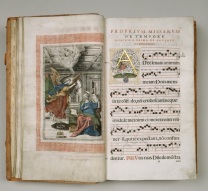 From left: A flock of chanting nuns, Dame Mary Bedingfeld, Brussels (1624-1685), ‘Annunciation’ and opening page of the chant for the Propers for the First Sunday in Advent

The ancient Chants which the Brussels Dames sang from their Moretus Gradual more than four hundred years ago had already survived a millennium – and are drawing a new generation of young people today.

Gradual was designed by the late Michael Mitchell of Libanus Press and published by Shelf Lives in a signed and numbered limited edition. A slim volume of 64 pages, with 37 colour illustrations, it is available in hardback (measuring 218 x 138 mm; ISBN 978-0-9955503-1-5) at £15 including UK postage.

To buy Gradual please click on the ORDER NOW tab.